From Keedrah Wiki
Jump to navigation Jump to search

Bahen Stihl was a Loshmerian sorcerer, who now wanders the land wracked with madness. He gained this insanity while fighting a demon. He and his allies presumed was the source of the Blackguard Haldrin's power. When Bahen is spotted, it is often said he is talking to no-one in particular about demons hiding in the shadows, coming after him.

Bahen Stihl was born to Berk Stihl and Lale Stihl. He was the second of two boys, and had a very loving home. His father, Berk, was a loyal minister to the King of Loshmere, and led a pleasant life with his family and his work. As Berk advanced in age, his eyesight began weakening, so he had Bahen and his older brother, Harun, learn to write and read, so they could assist him in his duties.

After age 12, Bahen began outpacing his brother in his ability to copy and read. Eventually his mother stumbled upon him using what could only be described as magic to split copies and translate. Somewhat joyful that her child was blessed but also somewhat fearful of his power, she quickly told her husband. It was said a grin crossed his face that day like never before. He ran home shouting "Bahen! Bahen! You have a gift!" and they celebrated that evening.

Having never received any proper training, they attempted to apprentice him to Sevris, the court mage. After two weeks, Bahen had frustrated the man. "The boy doesnt study. He just does it. He can envision fire, and ice, and with some energy, just make it so." "The boy is.. he could be dangerous!" Sevris exclaimed. Berk sensed there was some truth to this, but also a hint of jealousy, or perhaps a misreading of his own fatherly pride.

"My son's gifts are his to use." He was correct, and often Bahen was seen assisting his father. Soon around this time Sevris began amassing favor in the court. This did not disturb Berk greatly, nor many of the other ministers, all of them had to play politician sometimes. Around the same time, his mother died under mysterious circumstances. Sevris made a power grab that began small but eventually turned to the throne itself, and Aldar Loshren was ousted from power. Sevris appointed himself Regent, and had gained power from a benefactor named Gerishal Raintree, becoming a Lich. At this point, Berk and his family went into what was essentially hiding. They lived in the woods inside an old woodman's hut which was long abandoned. There they managed a meager lifestyle.

A few years passed, and eventually Bahen met up with the Company of the Lion, a group of adventurers traveling with The Lion Trading Company caravans. Much to his surprise, it was soon discovered that the owner of the Lion Trading Company, Brysten Marcus was actually the disposed Prince, Aldar Loshren. When the Company intended to retake the throne, Bahen joined them in their efforts, quickly proving his skill at manipulating the raw power of magic.

With the kingdom and royal family returned, and his family once again comfortable and happy, he informed his father he was going to see the world with his new companions. "Go my boy. You have done so much for me, and Loshmere. The rest of the world could use you, too." With that, they hugged, and Berk cried. Bahen ran down the road, to meet the rest of the Company and join the caravan back to the west.

Once the Company investigated and discovered the location of Gerishal Raintree, ensconced in a sepulcher sitting admist the ruins of Riverkeil, they began assaulting the new Blackguard. However this battle was costly, and Thalinbar and Haldrin both lost their lives. Bahen himself was assaulted by an enfeeblement spell. This eventually did wear off but it rendered him slow, and mostly unable to assist the party for quite some time. After it wore off, Bahen looked a bit more haggard, as if the experience had truly worn on him. 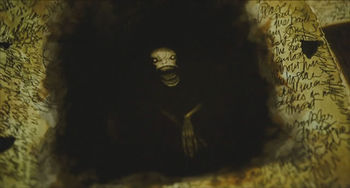 Bahen did continue with the company long enough to witness the rise of the Blackguard Haldrin, one of his former allies. When finally faced with the demon behind the Blackguard's powers, Bahen was driven insane and has remained so to this day. Bendroden attempted to get him help, but his paranoia and insanity combined with his overwhelming magical ability would be incredibly hard and dangerous to contain. He is spotted occasionally wandering down roads, in the wilderness and near small villages. No-one knows if he is lost or can ever be truly saved from the madness that overtook him.