From Keedrah Wiki
Jump to navigation Jump to search 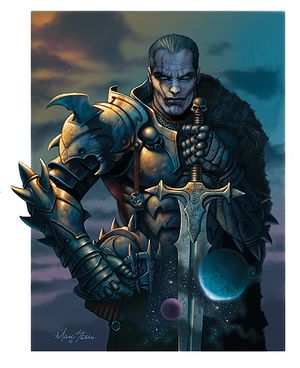 Through out the history of Keedrah, that have been various forces of darkness and evil that have worked to unravel The Balance, and bring pain to her people. This force has almost always been lead by an entity known as The Blackguard. Not much was known of the blackguard until recently, most of which was uncovered during research by the continental elf and original Company of the Lion member, Thalinbar, and after his death, Alaric, a priest of Granus, a lesser god of freedom. There has been only a handful of known blackguards through out history, but each of them has effected the history of Keedrah in many ways, and left destruction in their wake. The earliest known blackguard was Halran Ram, a barbarian leader from the Aeg continent. Ram and his followers continually assailed the Windman Empire, raiding it's cities and killing it's people. It was Ram who was the first to sack the empire's capital, Marvaria. His assassin and successor, Hrongung, also known to be a blackguard, not only sacked Marvaria but razed the city. This is considered among historians as the end of the Windman Empire. The period between the fall of the Windman Empire the greater races war has scant information as far as blackguards are concerned, though there is some indication that one of the emperors of the Gallantrian empire may have been one. Kaiser Oethecar liked torturing his enemies, and conducted some of the most devastating raids against the continental elves of his time - wounds that run deep to this day. The most well known blackguard to date would be Hayze, the instigator of the Greater Races War. He was brought down by Eric Carver, who's daughter came under the attacks of another blackguard, a vampire wizard named Gerishal Raintree almost 30 years later. The Blackguard Haldrin, a fallen paladin of Lykora, was defeated in the skies above Danberg by Bendroden Lightbringer and his Company of the Lion.

In 1441 DR [1017 WE|30 GWR] , a company of mercenaries working for King Eric Carver witnessed the crowning of a new blackguard, Thomas de Agueda. They were unable to report this finding until 3 years later, when they returned from the Shadowfell and reported the The Lightbringer thier findings. Until this time, all five of them and De Agueda had been presumed dead, as no news had been heard from any of them in the interceding years.